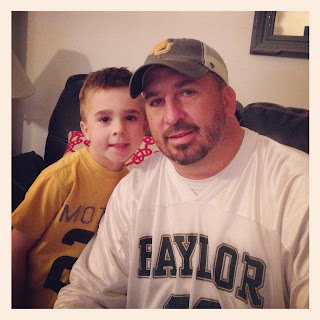 My daddy is a Texas Tech fan and I knew I'd never move that far away from my family. Ha!  I never considered Baylor because it was so expensive and Waco was too close to home.  Oh the thoughts of a teenager.

All that to say:  I met Gary while he was attending Baylor and I became a Baylor fan to support him.  So, since approximately 1997 when Gary and I started dating I transformed into a Baylor Bear fan.  It took years and lots of rivalry, but since I never attended UT it wasn't ingrained in me to stick with loving that team.

The kids are now Baylor fans obviously because we are.  Hayden thinks it's pretty cool that his daddy was on the Baylor football team, even if it was for a short time.  This year Baylor football is having an amazing year and it is so fun to watch the games with our buddies here in Ohio.

We're all looking forward to the weeks to come!!