I'm not sure what is going on, but my sweet daughter has developed an attitude. It is like a light switch turned on...she is a toot. She doesn't need help with anything, can't hear or follow instructions, and is a little sass pot. Gary and I have all the sudden started repeating ourselves a million times. She looks right at us as we speak as though we aren't there. Maybe because of Hayden's arrival?? But we have been talking about him forever...maybe she senses that he really is about to be here. Anyway, yesterday Layla told Gary to "slow down genius" Hello were did she get that?? I don't say that. I do say "hello" a lot, so I know were she got that one, but seriously. I'm very excited about Hayden because I have a little helper, but now I am nervous...my helper has turned on me. Heck she is only 3...what about when she is 13? So if you see pictures of her with clothes that don't match and silly sock and shoe combos you'll know I didn't want to argue with her...I guess you learn to pick your battles :) 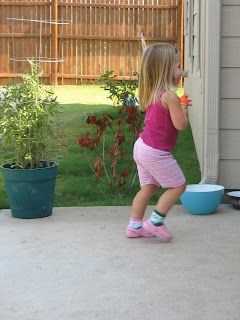 See what I mean....in the July heat we have on a green sock and a pink sock with crocs...go figure.

You are lucky it is just now starting! Sorry to say... it gets worse. Wait until she starts school and picks up fun stuff there. Then teaches it to her little sibling!!

I know we weren't like that when we were little! :o)