Lasagna & other stuff too

I tore this recipe out of a magazine at the doctors office the other day. I have been looking for something quick and easy to make during this busy time of year. AND...I'm counting WW points, so I used the recipe builder to create this recipe. I changed it around a tad so it would be somewhat low in points.

Ricotta cheese in traditional lasagna always blows WW points out of the water. If you want I'm sure you can get the original recipe at CampbellsKitchen.com. 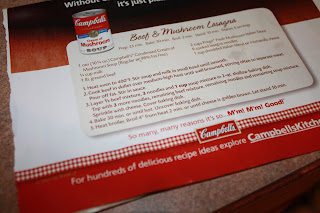 Here is my version:


heat oven to 400 degrees.
stir soup and milk in a bowl until smooth.
cook beef in skillet until brown.
stir often to crumble meat, drain. stir in spaghetti sauce.
layer 1/2 beef mixture, 3 noodles and 1 cup soup mixture in a 2 quart baking dish.
top with 3 more noodles and beef mix, and soup mix.
sprinkle with cheese and cover.
bake 30 minutes and then uncover dish.
heat broiler.
broil for 2 minutes our until cheese is brown.
let stand 10 minutes.

I cut the lasagna into 9 pieces and it is 6 points per piece.

Since I brought up Weight Watchers I will let you know that I have been doing it since November 4th. I lost 7 pounds over the first 2 weeks, and haven't lost a thing since. I haven't gained and have lost a few inches, but BLAH! I keep telling myself I'm doing good since it is the holiday season. But I want to lose more...now! I have zero patience! HA!
If I would run more, like I said I was going to do I'd probably drop more weight.
But I need more time!!!!
♥
Hey...Will you pray for me next Wednesday?
I'm having a minor surgery and I'm a little nervous about it. It is just a quick 45 minute procedure, but I am still freaked out about it.
You know, I'm a drama queen normally, so this is stressing me than normal!
Thanks!
I'm hoping for a quick recovery and that I don't make too much of a mess of CHRISTmas.
It probably isn't ideal timing for surgery, but you do what you gotta do!
♥
Now you know why I want quick and easy recipes.
Since we like it so much Tuesday night---I'm gonna make up another batch for Gary to throw in the oven next week.
Posted by Angie at 10:40 AM

Labels: about me, recipe

That recipe sounds pretty good! I hope everything goes well with your surgery and you get to enjoy Christmas without too much stress and drama!

I will definitely have to test this one out!

I will absolutely be praying for you! I'm a drama queen too so I can relate. Enjoy your weekend.

Sounds yummy and pretty simple even for me! haha! Sorry to hear about your surgery especially so close to Christmas...I hope all goes well and you are better in a snap! Praying for peace and quick recovery coming your way! Take it easy!