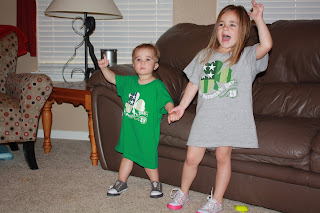 The kids were in rare form last night after their baths.
They are sporting new T-shirts.
The shirts are just some random shirts I found at Wal-mart for $1.00.
When I walked into the store I saw a huge sign that said $1.00.I was thinking dang what kind of clothing can you get for a dollar?
Seriously...you'd think I bought them new pj's from a boutique.
They love to sleep in T-shirts.
I did too when I was a kid, and Gary said he loved them too.
The ones I bought are so soft...already broken in :) 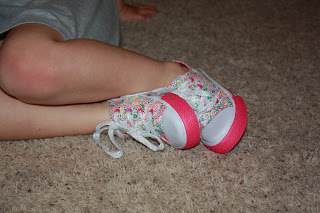 Layla Kate has been asking for new shoes...and she needs them.
She would really like to wear flip-flops and sandals to school...BUT
1.) She says she can't run fast enough without tennies on, and
2.) She gets mulch from the playground stuck in her shoes.
I found these fun shoes at The Children's Place.
At first she didn't want anything to do with them...they have laces.
She can't tie yet. But, she said she wants to learn! 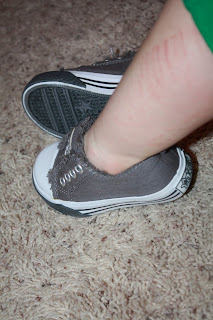 Hayden Cole got a pair also.
When he saw Layla trying her new shoes on he had to join in the fun.
And then I thought it was a great time to take some pictures!
Oh, and see the huge scrape on Hayden's little leg...he fell...he cried...he's better.
Silly boy he is such a bruiser! 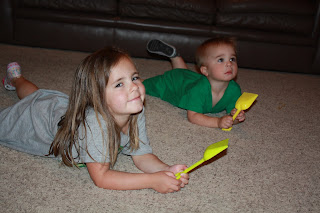 Today I am linking to:

your kids are so darn cute!!

They are just adorable, getting all excited over the little things. Priceless. I love those shoes and I'm glad that Hayden is better.

I'm headed to Wal-mart this morning, I'll have to look for some $1 shirts, too.

I don't know what it is about kids after bath. My Luke loves to run around the house naked. He thinks it dries him off even better than the towel. :)

I love to buy shirts at walmart on clearance! I get a ton of the solid color kids shirts for $2 sometimes! I love the new shoes too. My kiddos all got new sandals for Easter and they were so excited about them!

haha they are too cute!! yay for $1 shirts! and those shoes are adorable. nice job mama! :)

I have a linky party going on where you can enter a post about anything you want to share with others. I would love it if you entered this one!

You can't beat shirts for a buck! Those news shoes are cute!! Love the pics!

Isn't it funny how the little things can be such a big deal?! Your kids are adorable!

I love a good deal almost as much as I love cute, fresh from the bath kids

I published the recipe for you :-)

your kids are adorable!

And I feel the same way about the mulch in my flip flops! YUCK!

Oh I love to sleep in T-shirts and did all the time as a kid. They look cute in them! Love their new kicks!!