Hayden will be 2 1/2 in January.  He is my sweet little boy.  Every chance I get I try to get a hug or snuggle from my baby boy.  Every night after prayers and singing our songs Hayden puts his arms up and asks me to bounce him.  So, for just a few minutes I get to hold him in my arms and bounce him like I did when he really was a baby.  He is so sweet when we say prayers and sing Jesus Loves Me.  When the song mentions 'he is strong' Hayden shows us his muscle arms.  He even says 'I strong like Jesus.' 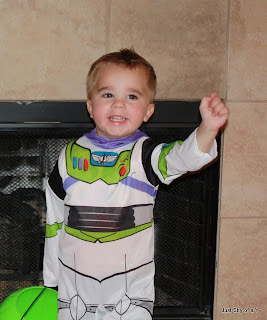 Hayden has done well being in preschool 2 days a week.  He is learning songs and his ABC's.  He could already count to 10 before he started preschool.  To me it is crazy that he learned his numbers before his ABC's...Layla was the complete opposite.  If there is one thing I have learned about being a parent it is every kid is different!!!  I really wish new moms would realize that, and not beat themselves up by comparing their kids to others.  OK, back to my handsome boy :)  Hayden recognizes most of his shapes and really tries on his colors.  His favorite color is yellow, and he can tell what is red and green.  He struggles with most other colors, but we are working on it.

Hayden loves sports.  He loves to toss the football in the backyard, or the house. ha!  He broke one of my wine glasses the other day.  It was empty, but oh what a mess. Glass was everywhere.  He felt so bad.  He loves to play golf, and he is getting so good at it.  He can also hit the baseball off the tee.  I am pretty sure he can do any sport he wants.  He is so athletic.  He loves to jump on the trampoline.  It is so cute to see him get better and better at doing silly tricks as he jumps.  I crack up every time I see Hayden run...he chases his sister and still has that silly toddler run. 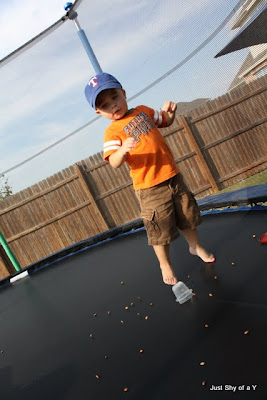 Hayden has become a picky eater, but I don't worry about it.  There are certain foods he loves so I serve those when he hasn't eaten in awhile :)  He loves carrots, pinto beans, and french fries.  He can drink his milk or juice in 2.3 seconds.  I just don't get that...he acts like he is so thirsty all the time.  If I would let him I am pretty sure Hayden would eat butter plain.  Any chance he gets he sticks his finger in the butter dish.  That's my boy!!  His favorite lunch is chippies and peanut butter and jelly.  I still try all the time, but he won't touch broccoli or green beans.  I'll never give up...those are two of my favorites! 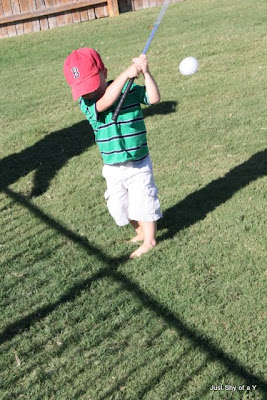 Hayden is talking so much. This morning he said "I feel bettar".  He just got his diaper changed and he was happy to be clean.  By the way, that makes me happy...he is really hating dirty or wet diapers right now.  He will walk like a silly man so it doesn't touch him.  Legs spread all wide and stuff.  I hope this will end in us getting diapers out of our house for good!  Anyway, back to his developing vocabulary.  He is stringing words together and making small sentences.  He says "welcome" instead of thank you!  But we get what he means.  He cracks me up if I ask if his pants are wet...he says "no I perfeck."

A few other fun quotes:

My hickups gone. He is obsessed with hickups!

Hit it hole. (When the golf ball goes in the hole.) 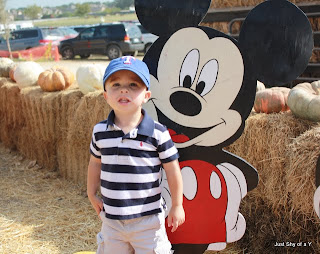 As you can see in most of the photos I post Hayden loves to wear a baseball cap.  He has four and loves to wear each one!  He grabs whichever one he is in the mood for.

He has recently decided he really likes TV and his favorite TV show is Mickey Mouse Clubhouse.  He loves it!  He is also a huge Woody Buzz (Toy Story) fan.  One day he watched all three movies in one day...he played with me while we watched them, so it isn't like we just sat and stared at the TV for 6 hours straight.

And I could go on and on and on!!!  I feel like I have just rambled on, but that is what mommies do... right?  So, there is an update of our 27 month old lovable boy!

So handsome and smart (and strong!)

He's such a cutie! I think it's great to get all of this stuff down because they grow so fast. I love him in his baseball caps!

This is so neat that you are doing this - documenting each kid and the current stage they are in! I love reading about them!!

He is a smart, handsome and very loving young boy!! Enjoy it!

I agree with Aly...I think it's so important to document all these little things. If you're like me you have trouble remembering one moment to the next so this will always be a great reminder to you and one day, your kids! He's a cutie patootie! I can't wait until GG starts talking more! And I really like the idea of preschool only a few times a week while they're still this young. So many I read about have their kids going full time shortly after they turn 2...just seems like a lot to me! He seems like such a happy boy...go Mama!

He is SOOOO cute!
And I impressed with his counting also :) that's awesome!!! Adorable and brilliant... love him!

Totally agree with you about the Mom's comparing kids things. That has ruined some friendships for me, and it's so silly....but some Mom's just can't get past it!
End rant. ;)
Your little guy is a cutie!

He is such a sweetie! I wish we lived closer...I know he and Eli would be great friends!

I love this age.....so adorable and developing so much. He's so darn cute. It's hard when there picky but it's not worth the battle. I have a 9 year old that's picky and another who is the complete opposite! Just like you said...you just can't compare.

He is such a cutie! I know your so proud of your sweet boy.