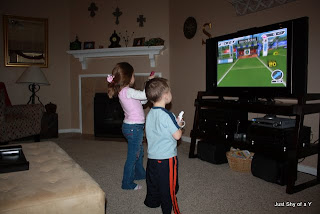 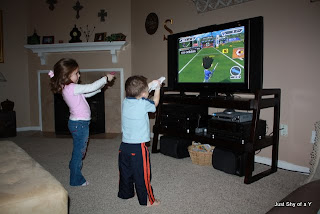 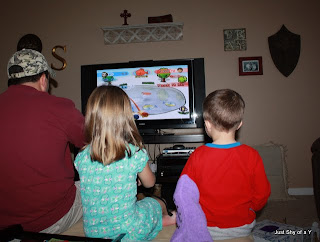 That is basically what our living room looked like for the past week too:) And I think Jason liked the Wii better than the boys because he stayed up a few nights playing Mario Brothers for hours after the kids were asleep:)

cute!
i miss having a wii!!

Mom's all over the country are looking at these pix and saying, "yup! Got the same thing in the other room right now..."
:)

I don't know how the dads do it. What great sports they are!

My kids are wii-addicted as well! I am using it to my advantage though... they can't have it until they... insert chore here ;-)

these are great pictures =)

At least their spending time together right?? It is really fun to play with a bunch of family or friends!

I think that's the only reason I'm not allowing it in my house. I know that it will be just one more thing to get distracted by. My husband already has a 360.... I don't know if I could have a Wii...

the Wii is SOOOO addicting... I can relate completely

We are wii addicted too! My kids all fight over it.

Its so hard not to be addicted!