...is 4 months old!
We have had him for over a month, and he is fitting into our family so well.  He is a spunky little pup full of energy!  He loves to pester the kids and Harley.  Harley spends 80 % of her day growling at Bogey.  You'd think she'd be used to him, but she isn't.  They fight as much, if not more than the kids do. 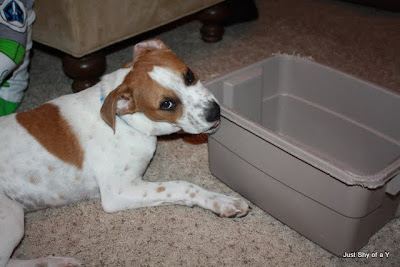 Bogey is 25 pounds and growing.  He eats all the time and begs for more food.  I think he would eat all day long if we'd let him.  He is being crate trained.  He is doing great with it during the day when we are gone on errands.  He should sleep in the crate at night too, but I have been letting him sleep with us.  One day he is going to be too large to sleep with us.  He sleeps at our feet and loves it!  He is doing so well at potty training.  He hasn't had an accident in the house in a few weeks.  He sits at the back door waiting for one of us to let him outside. 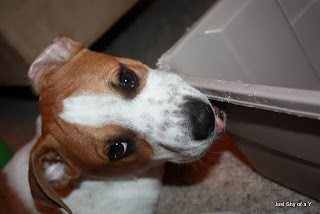 He chews on everything he can.  On Tuesday morning he woke me up throwing up.  And he didn't get better.  Poor little puppy was so sick.  He just layed around and wouldn't eat or drink.  Gary and I decided to take him to the vet.   They did ex-rays and a few tests and just decided it must have been something he ate.  Bless his heart, they gave him medicine and he is a little better now.  Thank goodness.  I hate when my kids and puppies are sick.  Pray with me that he doesn't have Parvo.  He goes through spurts where he is better, worse, better worse. 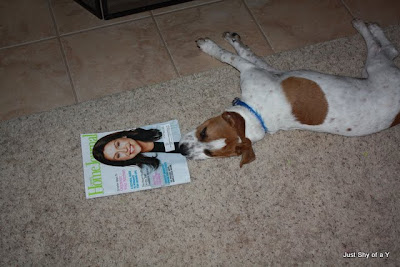 We are all so happy to have Bogey as our newest family member.  We are super happy to know we adopted him...we saved him from an uncertain future.  He will now bring us joy for years to come.

Such a cute puppy! I hope he is feeling better now! His eating habits remind me of Eli...that child would snack all day long if I would let him:)

I'm glad he's fitting in and feeling better. I hope that Harley gets used to him soon.

Just wanted to stop by your blog and say hello and tell you I am your newest follower! :) Love your blog!

Bogey is so adorable and sounds like he's full of energy! You must be thrilled that he's house trained.

He is such a cute puppy!

Ahhhhh he is so cute!
Is he feeling any better??
And you spoil him letting him sleep with you. I always tried to let Wilson sleep with me but he would never settle.

He's such a cute pup! I bet he's just been eating some things he shouldn't be (bugs, wood, legos, you name it, and a puppy will eat it) parvo is usually one of those things they get or don't get, but I imagine by his age if he was going to get parvo he already would have it. It's some nasty stuff!