Layla never used a pacifier. Hayden loves his. I am afraid of this 'nummy' habit. I see so many kids older using nummys, and I don't want Hayden to be one of those kids.
****when I say older I mean older than Layla.****
We saw a girl at the store the otherday that had to be 4 or 5 with a paci! 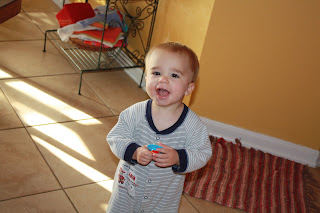 He is laughing in this pic holding his nummy! I told him to take the nummy out of his mouth. 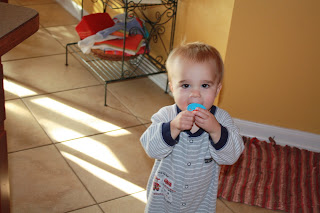 He took it out and put in right back in and was laughing like crazy! 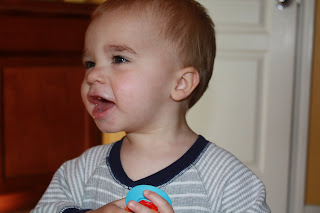 He thinks it so funny when I talk to him about the nummy. If he sees it he points to it wanting it. I tell him that he doesn't need it. He and I are very open about this nummy thing....he wants it...I don't. He is 15 months old. When he was 12 months I almost took it away for good. 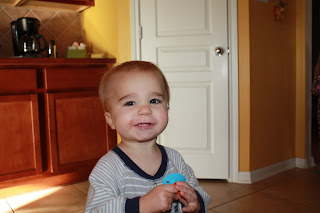 But Gary talked me into letting him keep it. Why? Because Hayden was getting 4 teeth at once and he wanted it. It seemed to be the only thing to soothe him. He is only gonna get more teeth....Arghhhh... I'm thinking I'm gonna get rid of it soon.
Advise? Is it to early? Too late? Has it gone too far? Should I only let him have it in his crib? Only for naps and at night? Or just junk it?
Posted by Angie at 10:55 AM

I am in the same boat except mine is 22 months! I swore by the time she was walking she wouldnt have it, but here we are and she still does. Its hard when it works as something to soothe them. Right now she only uses it at nap time and bed time, but Im about ready to just say bye to them altogether.

I let both of my older boys keep theirs until just after their 2nd birthday. We went cold turkey when we took away the paci...I just threw them all out one night and that was that! I look back now and think how old they looked with a paci in their mouths...but that is what worked for us! I have a feeling my one year old will be keeping his until his second bday too!

Mollie never took hers either. I would say let him have it for a while, and I would start trying to take it away around 2. But that may not be the politically correct answer! :) He looks so cute!

Ok so I was really bad and let my guy keep his until he was 3. Isn't that horrible. It just made my life so much easier. I have 2 older kiddos and they both gave theirs up around 14 months.

Part of my issue was that he seemed to still be my "baby" b/c he was still on his paci and I knew he was the last kiddo and didn't want my baby growing up.

Honestly, you do what your gut tells you. I don't think he's too old or it's too late. He's your baby and that's what soothes him. Caleb stopped around 18 months. Basically he was out of town at the granparents and they just didn't give it to him and they kept him busy. Then when he came home he didn't want it anymore. That worked for him. It may be different for Hayden where he'll take it only at naps and bedtime and then eventually let it go. You'll make the right decision because you're his mama and we know the needs of our children!

That's a tough call. I agree that a four year old should not have it. When my daughter was two,(she only got it in bed) I decided it was time. I took all 5 of them and cut the nipples out of them. She picked them up, looked at them and said "broke" She threw them in the garbage and that was the end of it. I think I got lucky though. Good luck. Now my granddaughter is 15 months and she gets hers only in her bed. Hopefully her mom will have the same easy time taking it away when it is time.

We are passy fanatics in my house. Jack was only allow to have his in his bed and we got rid of it completely (using the "broken" method) at age 2. Melody was even more obsessed with hers. I tried to enforce the bed rule, but it was hard. I did, however, ban it to the house. I finally got rid of it, cold turkey, because she was just so obsessed with it. And it was so liberating...once it was gone it was like, out of sight out of mind. Good luck!

Awww.. cute! We called my daughter's a binkie. She LOVED it.

No real harm came from her attachment, but you know your little one best. I honestly can't remember when we said goodbye to the binkie!

Well, my girls were both 3 1/2... horrible, I know!! They were both SO attached to it. It was so hard to take them away!! But, I really don't see the harm in it...they are bigger now and over it with no harm done. (Of course Kenzie will be 5 in a week and would still take it back in a heartbeat if I would let her!!)

I hope it's not too late. My 16 month old little dude looooooooves his binky!