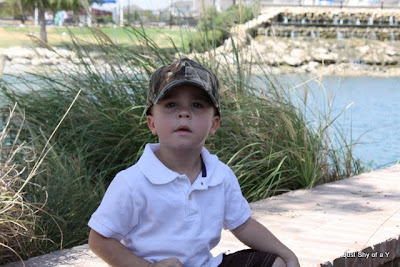 Hayden is a spoiled Momma's boy.  I think I spoil him and do too much for him.  Bless his heart.

He is getting really good at dressing himself.  He is super fast at putting his shorts on and taking them off, but sometimes he gets really frustrated with shirts.    He has gotten tangled up several times lately.  He likes to see the picture on his underwear, so he puts them on backwards.  He puts on his own pull up at night time.
Hayden is potty trained.  He thinks he is such a big boy.  He has had his share of accidents though.  Potty training accidents are very frustrating... a  few days ago he pee pee'd in his car seat in my new JEEP!  Gary and I were so mad. Ugghh!  He does wear a pull-up to bed at night.
Hayden can kick a soccer ball, hit a golf ball with amazing form and can throw a mean football.  He loves to hit the baseball and catch it too...thank you Sandlot!  When he throws the football he does the double tap.  He is so funny!
Hayden is getting more brave in the swimming pool.   He doesn't want to be out done by his big sister.
Hayden wears a size 3T-4T and a size 8 in shoes.
He weighs 33 pounds and is 39 inches tall.
Hayden is starting his second year of preschool in just a few weeks and he will be participating in a little gym class.  He is so excited about jumping around in the gym!

Hayden is a closet learner.  We read to him and ask him to say his ABC's, and he does, when he wants to. Usually he surprises us.  Right when we think we should worry about if he is learning our not he will bust out with some smarts...haha!
He goes to bed around 7:30pm and sleeps until around 7:00am.  He still naps in the afternoon, but the naps seem to be getting shorter.  Some days he will sleep 45 minutes, and other days he sleeps over an hour.  I don't feel terrible if we have plans and he skips his nap.  I just put him to bed earlier and he gets the rest he needs.  One morning last week he woke up at 6:30 am and Gary told him to go back to bed.  He crawled back into his bed and slept until 8:00am!
Hayden eats like a stinkin' bird.  We have to make him eat. When he eats he has great manners and uses his utensils very well. His favorite thing to eat right now: cereal.  He asks for cereal all the time.  He loves blueberries!  Typically he eats meat and fruit.  He loves steak.
His favorite movies right now are Cars, Toy Story 1-3, and Micky Mouse Christmas.  Yes, Christmas in August.  haha!
Hayden asks me to bounce him at night before bed.  Yes, I do realize he is 3 years old, but I still hold him in my arms and bounce him like a baby at night.  It seems to soothe him and I love the snuggles.  Sometimes I rub his back while he drifts off to sleep and he makes me rub under his shirt.  haha!  Picky little stinker.

He doesn't mind speaking his mind.  He will tell us exactly what he thinks when he thinks it.  His sister doesn't bust out with the sass quite as bad as he does.  He has no fear when voicing his opinion.

Hayden LOVES to be tickled.  If he hasn't been tickled for the day he will ask for a "tickle fest."

Hayden loves Bogey.  Those two little guys are best friends.  They run and play and wrestle all the time.  It is so sweet to see them play together.  Bogey truly loves Hayden.

He loves our new Jeep.  When we are driving down the street he notices other Jeeps.  He screams out the color of the Jeeps we see, and he points out if they have a 'hard top' or a 'soft top.'  That is totally the boy in him. 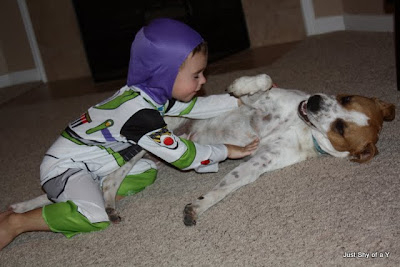 I love this picture of my two boys.


This concludes my scrapbook posts for the week :)  I'm so glad I can document these things about my munchkins.  I hope some day they look back through the blog to see how silly they were at this age!

He sounds like a ball of fun. Steak...a kid after my own heart! I love that you called him a closet learner...Caleb is the same way. I still cuddle with Caleb for him to go to sleep and he's 4 1/2! Nothing like snuggles.

Such a little cutie!

Hayden and Lena Kate would get along so well. They could sass each other all day long! Then relax with a bowl of blueberries(her favorite) and watch TS or MM..favorites at our house too. Love the scrapbook posts since that is pretty much all my blog is these days.