the funniest chefs I know

Gary's oldest friend came to visit for the weekend.  Jason and Gary have known one another for 31 years.  They have kept in touch and every time they see each other it is like they have been together every day.  They always pick up where they left off.  I love Jason!  He is one of the best guys I have ever met.  He is so nice and sweet and just a wonderful guy. 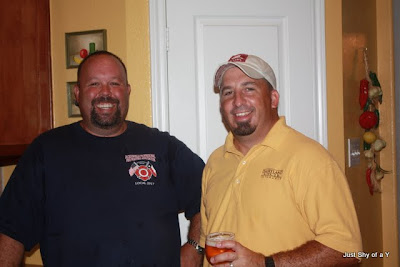 They both love to cook, so they went to the grocery store and decided to cook up a fest. 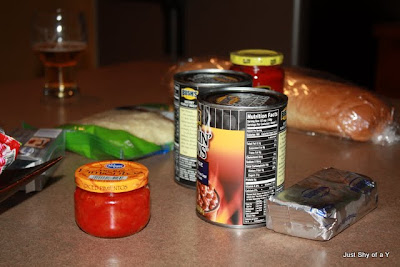 I was thrilled to have the guys cook dinner.  I just ran around taking tons of pictures of their creations.  I had a blast and I learned a few things from the guys. 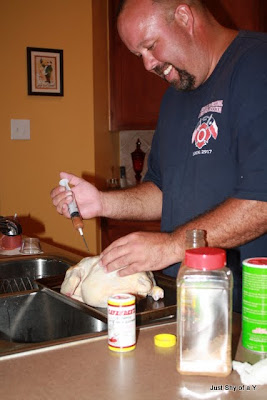 Jason made beer can chicken.  He stuffed it with cilantro, roasted red peppers, jalapenos and who knows what else.  I don't cook with whole chickens, so I was watching his every move.  I think I may be able to take on a whole chicken on now!  It was like cooking school for me :) 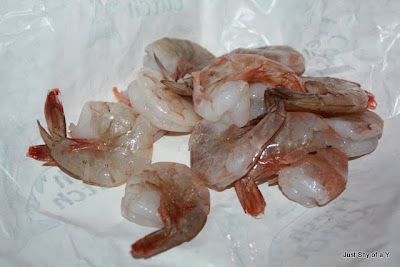 The guys bought shrimp and chopped it and stuffed it with cream cheese and a ton of other stuff and made stuffed jalapenos.  I was seriously in hog heaven.  I was a bit scared for my kitchen though.  The guys cooked all the food, so I didn't mind cleaning up a bit. 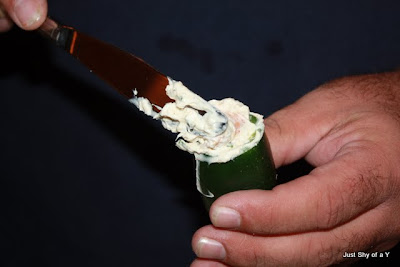 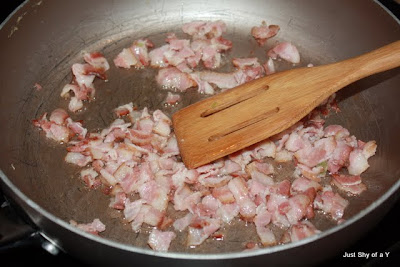 And the bacon...for the love of Pete, they added bacon to everything.  Bacon wrapped shrimp, bacon wrapped beer can chicken.  They even  put bacon in the roasted red pepper cheese bread. 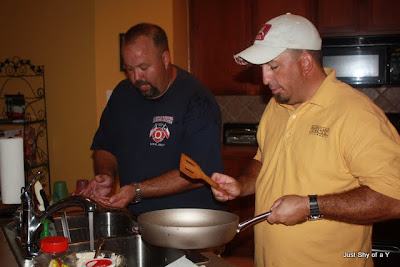 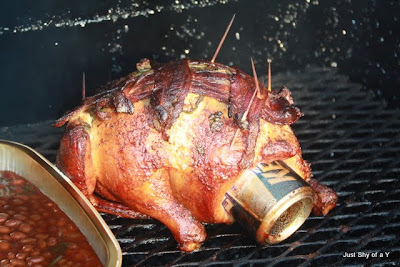 The didn't want to waste good beer, so they used a Keystone Light for the beer can chicken.  haha!  I laughed so hard at these boys.  When they are together it is an ab workout for me. 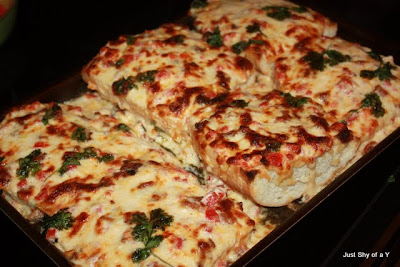 Cheese bread.  This was the best part of my day. Holy Moley.   This bread will seriously make you wanna slap your momma...haha! 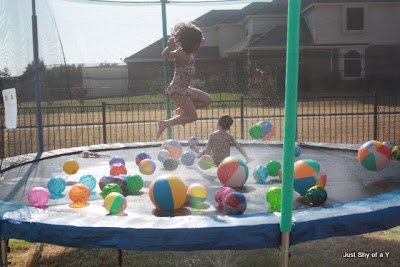 Since the guys were grilling the kids just HAD to be outside.  As soon as the dogs or kids see Gary grab the charcoal they all four run to the back door.  It is so funny.  He stores the charcoal in the garage and he has to walk through the house with it. When they see the charcoal bag they all run.  It is hysterical!! It was so hot yesterday, so we put the water sprinkler under the trampoline.  THEY HAD a BLAST! 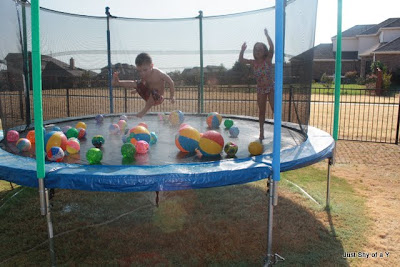 We still have all the balls from their birthday party, so they had a big time bouncing and throwing balls.  When the balls escaped the trampoline Bogey would steal one, and run off and pop it.  He is a wild pup. 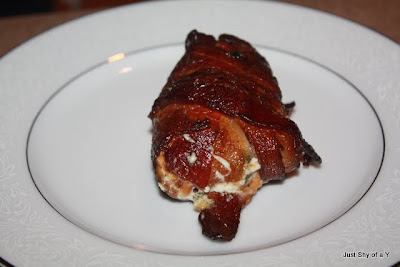 At the end of the day we never even sat down for dinner.  We were all full from sampling the food.  I was so full I couldn't move.  I also couldn't taste anything for about an hour.  I bit into a bacon wrapped jalapeno and it was on FIRE!  I literally wanted to wipe my tongue with a towel.  Have you ever eaten anything so hot you were dying and sweating??  I couldn't get rid of the burn.  Even though it was hot, it was delicious.
*****
Today we are getting ready for Layla's first day of first grade.  My Facebook feed is full of 1st day of school pictures today, but Layla's school starts tomorrow.    I think she is ready, and I know I am ready for her to have a great year!
Happy Monday!

Seriously Rondell would LOVE you all. I may have to buy him a ticket and send him to your house. Bacon wrapped anything is right up his alley. Sounds like a really fun weekend!

ok do tell about the cheese bread

and tell jason i'm expecting him this weekend...i'm starved

What a great idea with the sprinkler under the trampoline!!! And oh my gosh - you are a lucky lucky woman... My husband can grill, but yours takes it to a whole new level! He and Jason look like brothers!

Oh my goodness, extra bacon andddd cheese bread!? you lucky lady with all that food :) Oh and you poor thing with the jalapeno, I know that feeling, where you can eat ice cubes and your mouth still feels like its on fire, ha! PS hope you guys have a great first day!