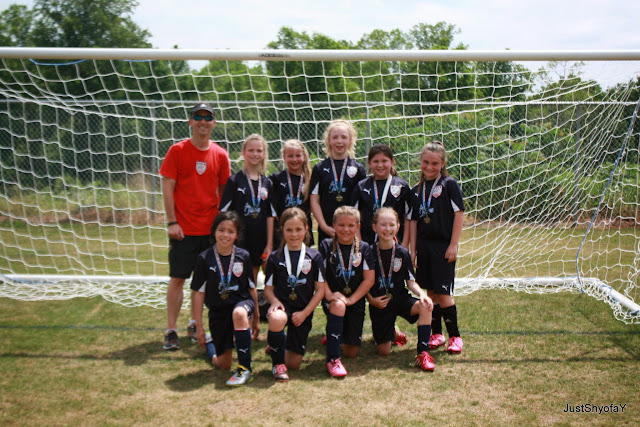 Today was the Dragonflies last soccer game of the spring season.  It was a fantastic season and I am so proud of Layla.

I can remember a time in Ohio when Layla played soccer and she hated it!  She didn't want to go to practice, and absolutely hated the games.  I know she loved the sport, but coaches and teammates are so important when playing a sport.

This season in Georgia she was blessed with a coach that rocked.  He knew how to build the girls up.  He saw their strengths and weaknesses and helped each and every girl get better and build more confidence.  I'm not sure if he's coaching again next season, but if he does we would love to have him coach Layla again.  She improved and acquired so many new skills this season.  It was so fun to watch her grow and learn and I couldn't be more proud.

She took a hard ball to the chest on Saturday.  She got the wind knocked out of her, but she recovered and played again later in the game.  The game was rough and they fought hard, but ended the season with a loss.  I don't think anyone on the team really lost though.  They all gained tons of memories and friends to last forever.  It was a winning season for sure!!