The munchkins and I laid low this past weekend.  They have both had a cough-cold for a week or so.  It seems like once one gets better the other gets sick, and then it starts all over again.  So I decided to veg out this weekend since Gary was out of town.  Here are a few pictures of our adventures: 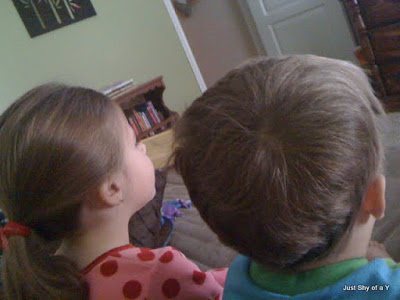 We watched movies...tons of Christmas movies.
Layla wore her favorite Christmas gown and then we washed it and she wore it again. 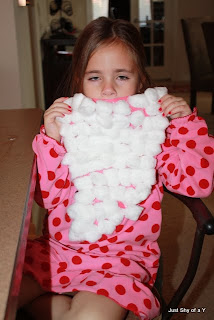 We made Santa beards. They were supposed to be elf hats, but we got carried away. 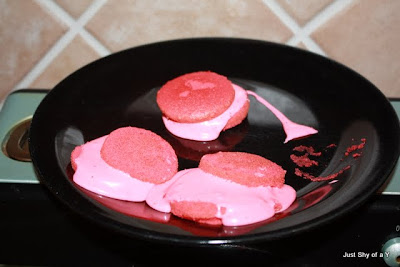 I made cupcake/cookie treats that failed. They tasted good, but look terrible.  I can't believe they didn't work out. And they are supposed to be red. Not pink. And I can't even post a photo of the green ones. They are really ugly. 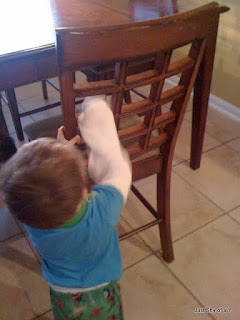 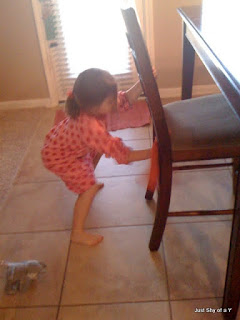 Layla loved helping.  She went to town and was a big helper. 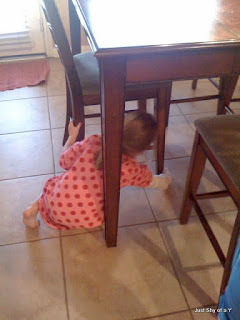 Hayden was bored in 2.3 seconds.
I was convinced that the two days at home were just what we needed to get over our sickness. Until Layla broke into a horrible fever last night at around 9:00pm.  She was piping hot!  I knew when I woke up this morning I was going to call the doctor.  After Hayden had a sleepless night too I knew they just weren't better. 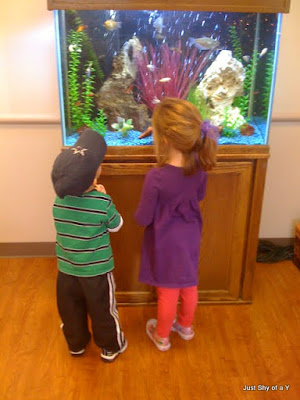 I took these pictures with my phone, so they aren't the best quality.
We got ready and thankfully our dr. office got us in bright and early this morning.  Layla was so nervous about going to see Dr. Shori, but she did great.  Hayden did okay too, but he has recently learned how to sass me.  I got so mad at him...ughhh! He says "no" so mean.  But I know he isn't feeling well.  Turns out Layla and Hayden both have sinus infections.  The colds they both started with just turned worse.  Layla had been complaining of a weird sound in her ear.  She has never had an ear infection in all of her 5 years, but she has an infection in her right ear.  Not even the one that is bothering her...weird right?  Hayden's ears look fine, but he has a really bad cough and tons of drainage.  And...the doctor was going to test them each for strep, but said she was going to treat them anyway, so why test them? Whatever...I thought that was weird. Anyway, we got 2 bottles of amoxicillin.  Hopefully this will fix them right up in time for Christmas.  Even though they are feeling crummy, they have both been pretty sweet.  When I am not feeling well I am a big, grouchy, cranky bear.  They have had their moments, but have done pretty good.  Kids are so resilient. 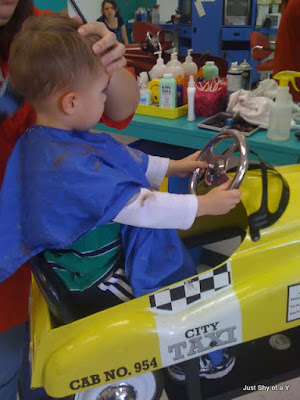 Hayden even sat still and was a good boy while getting his hair cut.  His hair had gotten so long. It was bad, but he is back to looking cool again.  I think he felt better after his haircut because he mentioned going to a restaurant with one of his girlfriends. Ha!  I can't make this stuff up.  Layla and I busted out laughing after he mentioned her...ha!  Little Miss Ava has a spell on my boy, and they are only 2 years old.
After picking Gary up from the airport, we are home and the kids are napping.  I'm sure they will feel better soon!  But wow....it never fails something crazy always happens when daddy travels!

Labels: fun things we do when daddy travels, haircut, hayden, layla, weekend, you can't make this stuff up

i hope the meds help them feel better quickly!!!

The socks on the arms idea is a really good one!!
I should do that with my kids. Hmmmm...
You're always coming up with the best ideas.
I hope the kiddos start feeling better.
We have amoxicillin over here too for Eliana - ear infection. *Hugs* and feel better to the smooches :)

i think i'll put some sort of booty sock on the kids and drag them around the floors tomorrow...i'm too tired to clean!

i hope the kiddos are feeling better soon hun!!
i love the socks on the arms idea for cleaning!! i need to get my nephew over here for some dusting, he loves helping clean ;)
bummer the desserts didn't turn out pretty, at least they tasted yummy!!

I hope everyone feels better soon! I am taking antibiotics right now, and the adult version is not nearly as fun as the yummy pink stuff! My pills are HUGE! Don't you hate when you have baking fails...especially if you spent a lot of time working on it! I bet they still tasted good though:)

Stuff DOES always happen when he leaves! I'm glad they are starting to feel better. We are battling colds here too and trying to rest up before the holiday. Hey as long as the cookies treats tasted good that's all that matters right?!