I made a very simple potato soup recipe last week.  It was one of those days when I planned to have something else for dinner, but I forgot to thaw the chicken.  Ho Hum.  I acted as if I totally knew what I was doing...haha!  I didn't follow a recipe at all.  I just made it up as I went.

I started by peeling, cubing and then boiling potatoes in a carton of low sodium chicken broth. 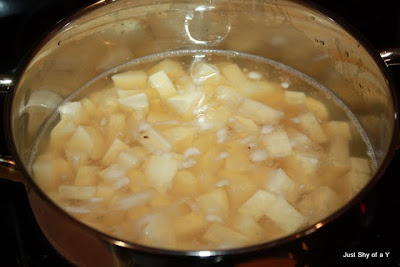 While the boiling was happening -- on the next burner over I sauteed garlic... 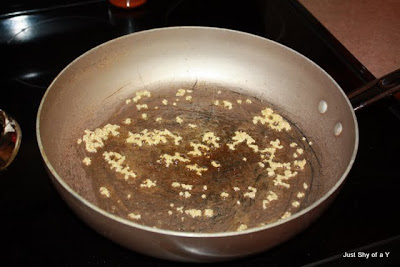 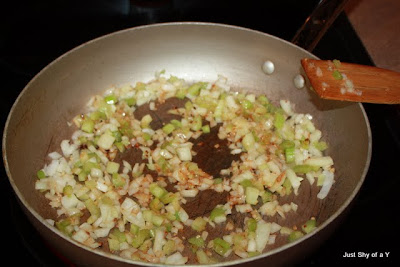 ...celery and onions in a tad bit of olive oil.

Is there a better smell in the entire universe than the smell of garlic, onions and celery on the stove top?  Seriously...not to sound corny, not that I was adding corn or anything, but IT MAKES MY DAY to smell good stuff cooking in my kitchen.  Ok, enough corny-ness.

The cold medicine I'm taking has seriously made me crazy-er than normal. 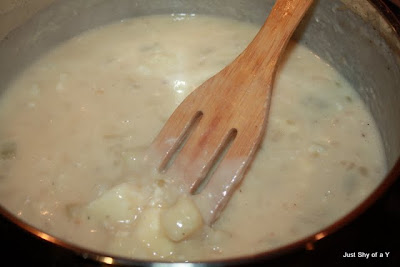 I let the potatoes boil until they got soft and then I mashed them up with a potato masher, I added the celery, onions and garlic to the mix.  I added milk as needed to make it soupy and then put about 4 oz of cream cheese into the hot soup pot.  I added salt and pepper too.

Then I let it simmer for 20 minutes or so.  I had to add a bit more broth so I didn't end up with mashed potatoes.  And that is it.

Potato soup a la ... fly by the seat of your pants. 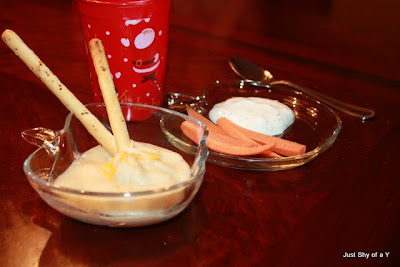 The kids ate soup with those fun bread sticks you can get in a box near the salad dressing aisle.
We also had celery, carrots and ranch dip & salads for the adults.

I made these for dessert.  They were WAY too sweet for me, but the kids really loved them! 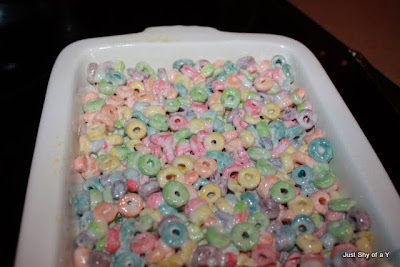 They are fruit-loop treats!
Made with fruit loops instead of rice crispy cereal.

How fun would these be right now with green and red cereal?  So festive and Christmasy.  I know that isn't a word, but I have been using it lately.

Have a great Tuesday!

I absolutely love potato soup. Ooh, I should add cream cheese to mine...yum!!!

Yum! I like potato soup, but I think I would have a hard time talking my boys into eating it. Maybe breadsticks would help:)

Would you believe I've never had potato soup? It sounds delicious though!

haha...that's my exact soup recipe...it's jake's fav....i'm making it wed for the inlaw dinner! woohoo love me some potato soup

That sounds delicious and easy! I often cook meals where I just make it up as I go. They usually turn out to be the best meals.