Hayden Cole had his half birthday on Monday. 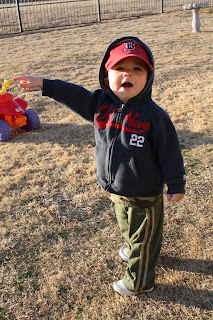 As you can see from this picture he would be lost without his pointer finger. Since he doesn't say much he gestures and points to everything of interest to him.

The only things he says are:

He also says "E" for Elmo, airplane, and/or drink. He points to whichever "E" is. 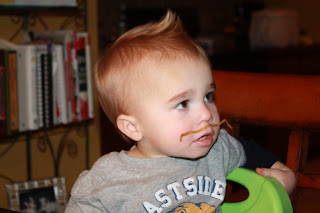 Hayden is quite the jokester. He makes me laugh every day. He is such a joy to have as a son. He does have quite the temper, and when he is angry or upset he holds his breath and cries like crazy. It takes years off my life. Hhhm. I did the same thing when I was his age.

He isn't using the pacifier anymore, but now cries sometimes when we lay him down for bedtime or nap time. He never cried before, but he is getting older and wants to know what is going on outside his room. 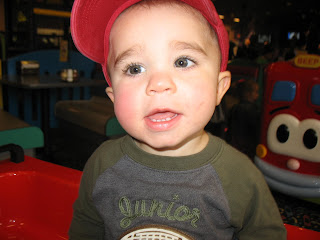 This busy boy can run like the wind, kick a ball, throw a ball, and clown around with the best of them. He does everything his sister does, good/bad. He uses a fork/spoon like an old pro. [to me that is impressive because Layla didn't use a utensil that well until she was almost three.] He points to most of his body parts when we ask him where they are. He likes to get books from the playroom and we try to read to him, but he gets up and finds other interests really quickly. He colors like big sissy, but gets bored with that too. He made Gary a scribbly birthday card because sissy did.

He is weighing in at around 26 pounds, and we'll visit the doc in Feb. to get his 18 month checkup. I feel so lucky to have a boy and a girl. The two sexes are completely different...it amazes me everyday.

I can't believe that in 6 short months I will be the mom to a 5 year old and a 2 year old.

He is such a cutie! Eli does a lot of pointing too! And I am so impressed that you got rid of the paci so easily...I am NOT ready for Eli to get rid of his yet:)

He is such a doll face!! I bet he is such a joy to have around each day.

Adorable pictures! What a happy family you have!

Aww, happy half birthday! He's such a cutie pie!

Thanks for your sweet encouragement.
I bet you have a beautiful voice!! I prayed that God would remove any obstacles preventing you from getting in the choir. Keep me posted, I'll be praying for you and would love to see your dream come true :)

Thanks for your sweet encouragement.
I bet you have a beautiful voice!! I prayed that God would remove any obstacles preventing you from getting in the choir. Keep me posted, I'll be praying for you and would love to see your dream come true :)

I know...it amazes me how fast time goes by. He's a cutie...I bet Charlie would have a good time with him!

He is such a cutie pie! I'm sure they grow up so quick right under your nose. Is that a noodle mustache in that one picture??? LOL!

What a sweetie! They grow up too fast!

Thanks for sharing your "baby" with us. What a cutie:)

Doesn't the time just fly by? I'm still amazed every time I look at my kids that they aren't little tiny babies! I can hardly remember that time too!

The girl with the flour in her hair said...