We are balloon crazy lately

Thanks for all the tips on dry hands...you guys rock!
I can't wait to try a few new lotions and hand treatments. 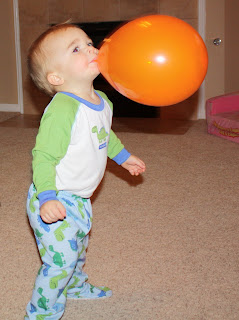 Hayden is pretty much done with the numi. [pacifier]
I posted awhile back about my worries with him still wanting and needing it. I changed up a few things with him....he was only allowed to have it at bedtime/nap time. My worries really just worked themselves out...as many of you said they would. He didn't ask for it during our nightly routine Thursday night. He hasn't asked for it since, except last night. When I turned his music on, he pointed to the dresser where they used to be. I walked him over there and told him they were gone. He seemed ok with my answer.
Nap times are a bit shorter, and I don't know if it is because he doesn't have his numi, or if he is just going through a growth spurt. Night time isn't a problem at all. Anyway, I'm not willing to give it back to him, so hopefully he will nap better again soon...numi free :) 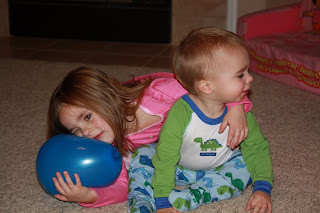 We have had fun during the cold months playing and doing crafts...BUT some days we run out of stuff to do. We had fun with the balloons a couple of days ago. I bought a bag of them, and we just blow up new ones if we pop 'em. Hayden is so silly...he tries to sit on the balloons. He freaked out when he popped one while sitting on it. Layla and I were totally cracking up. 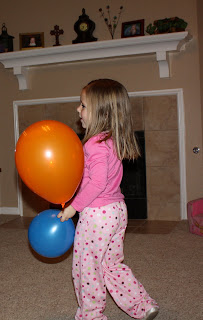 We are trying to decide if we want to get a gaming system to play. Our friends brought over the Wii on NYE and we had fun with it. But, I just don't know if we would use something like that enough to justify the expense. I think it would be good to have during the rest of the cold winter months. Anyway, I'm thinking on that one. I don't want to turn into a bunch of gaming junkies. We are such 'outdoor' people...I'm afraid if I spend the money on games and the system it would be a waste.

So, this has to be the most random post of jumbled thoughts EVER!!

Have a great Monday afternoon.

I'm gonna go continue to lick my wounds after yesterday's of a football game.

The Cowboys didn't show up, but were there. I'm very sad.

Yes...{tear}...I'm also saddened by the game yesterday. :( But, I still love my Boys and hope they bring their "A" game next season!

I own a PS3 and a Wii and I love them both! I don't play with them a lot, but I can tell you that all of my friends that have children love the Wii! There are many age-appropriate games and it gets them up and moving around for the most part (on days that it's yucky outside)

Oh so sorry about the game yesterday. NOT. Go Vikings!

Anyway, about balloons. Drew loves them. I saw a recent post somewhere where they attached long balloons to flashlights and made light sabers. So cool.

My kiddos are totally into balloons too! They go nuts when they pop, though!

Seriously, where were the Cowboys?! That was a terrible game!

And yea for no numi!! EJ still sleeps with it in the bed with her. Just close by in case she needs it.

Ugh...I dreaded giving up the passy. Both times it was easier than I anticipated. Hopefully it'll be easy with Charlie too.

We played Wii at a neighbors at Christmas time and loved it. I don't know if we are going to get one or not.

Agh, we need to get rid of the paci, too. I started weaning the last two bottles (morning and bedtime), but didn't expect the full-out milk strike that my boy has taken to. He'll drink water, juice, etc from his sippy cups, but getting him to drink milk is not so easy! And his paci is still his BFF- but he's only just turning 1 so maybe we have some time.
Cute pics!

Balloons are popular at our house too...such great entertainment!

My kiddos love to play with balloons! Eli thinks they are so much fun! We actually have one leftover from my mom's bday party right now! I am so worried about getting rid of Eli's paci! I couldn't find it today...and I turned the living room upside down looking for it:)

I honestly could not believe that Cowboys game. alot of people were picking them to win the Super Bowl. Sorry they didn't win girl. The kiddos look so cute in their jammies and playing with the balloons.